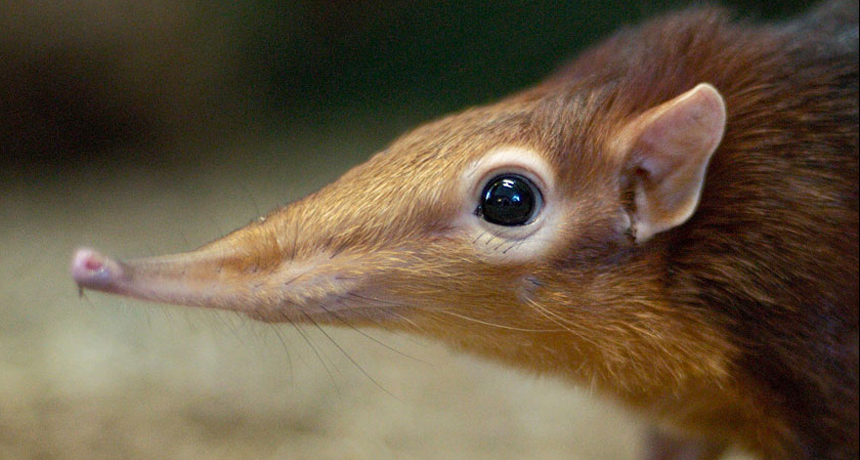 It is quite an amazing thing that we do not have to live on this big planet alone, and instead, we can share it with such a vast and extraordinary variety of animals. And while some of them might actually look quite frightening, most of them are definitely adorable and cute, so we decided to do them justice by creating a top 25 of the cutest animals in the world. 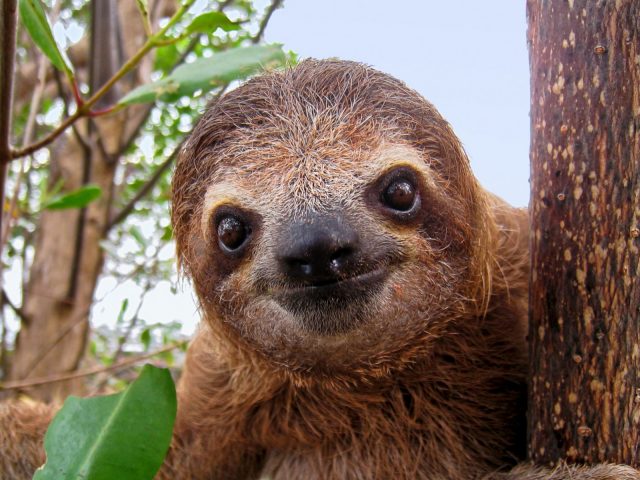 Our endearing top 25 starts with the relaxed and lovable sloth, which can be found hanging about in the rainforests of South America. Even though it might have been named after the sin of laziness, the sloth is actually not that lazy at all, but it does indeed take its time quite whenever it goes somewhere. As a matter of fact, moving slowly from A to B means that sloths do not attract much attention, which is why it is often disregarded by predators. (image source) 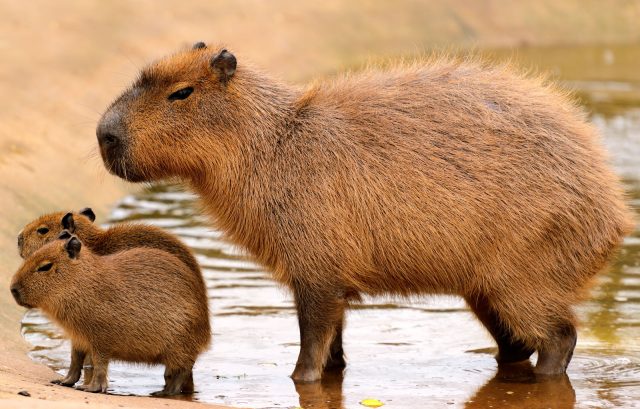 Known as the biggest rodent on Earth, the Capybara is a curious animal and a fantastic swimmer. It lives in all South American countries except Chile and it prefers wet and wooded areas around swamps, lakes, and rivers. Extremely sociable, Capybara prefers to live in groups of 10-30 individuals and feeds on grass. It has a pig-shaped body, a reddish-brown fur, and ears, eyes, and nose located high on their heads so that it can remain above the water when it submerge. 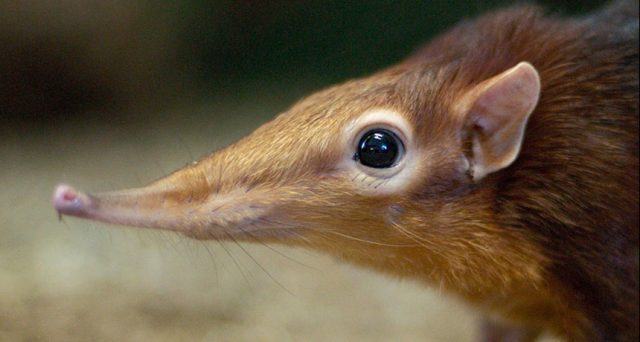 The next animal on the list fools us both by its name and by its appearance. Elephant shrews are small, furry mammals that are neither elephants nor shrews, but related to aardvarks, elephants, and manatees. Weighing less than a pound, these small animals can jump three feet into the air and they are extremely active during the day. They are known to live in the Namib Desert, which is one of the driest places in the world. (image source)

Read also : Top 24 Tallest And Most Majestic Statues In The World 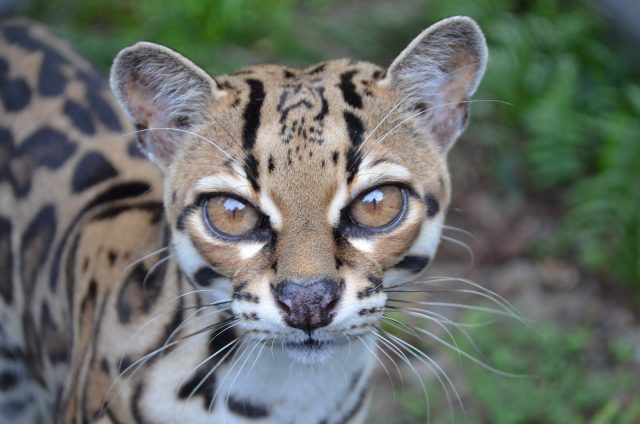 Found in forests of Central and South America, Margay, also known as the tiger cat is a nocturnal animal and weighs about 9 lbs. With its gray to golden-brown fur with black and brown spots, bulging brown eyes, broad paws, and long tail, Margay is an excellent jumper and climber. Highly intelligent, it prefers to be alone and spends its days in trees. 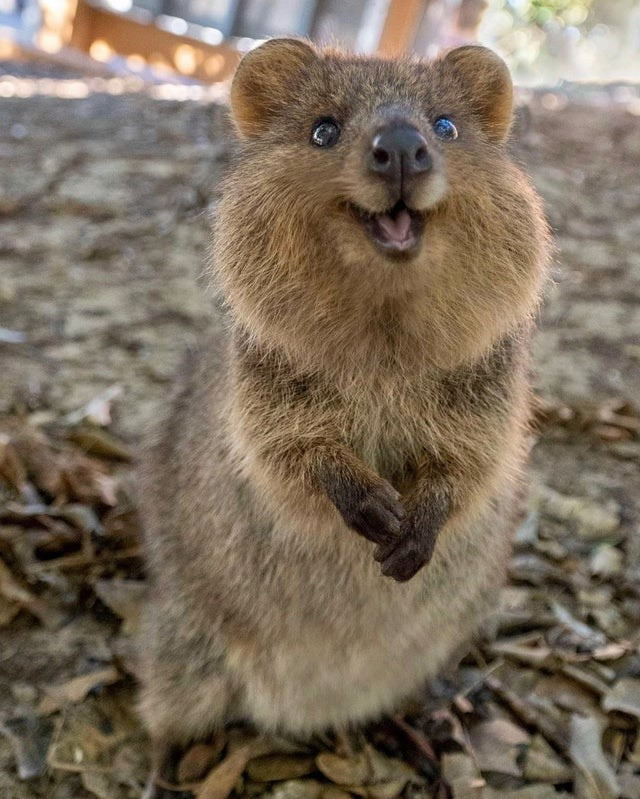 Quokka is considered to be the happiest animals on Earth. They received this impressive title due to their funny facial expression that gives you the impression that they are constantly smiling. In addition to the representative smile, he has a short, fluffy gray-brown coat, small, round ears, and a black nose. Being mostly active at night and sleeping during the day, Quokka is marsupials and measures between 40 and 100 cm. Furthermore, Quokka is very social and friendly animals and they can be found on West Australia’s Rottnest Island. 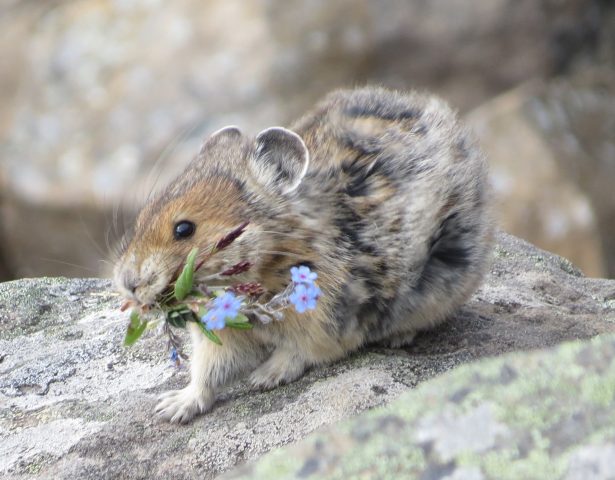 Really small and incredibly cute, Pika weights somewhere between 125 and 200 grams (4.5 and 7.1 ounces) and are about 15 cm (6 inches) in length. With a look that leads us to believe that it is related to the rat, this animal is actually part of the Lagomorpha group, which also includes hares and rabbits. Living in the parts of the Northern Hemisphere, Pikas are Herbivores and they spend their entire day searching for berries, seeds, grass, and weeds. What is interesting about Pikas is that although they do not hibernate in winter, they start to collect food over the summer. Pretty smart, right? (image source) 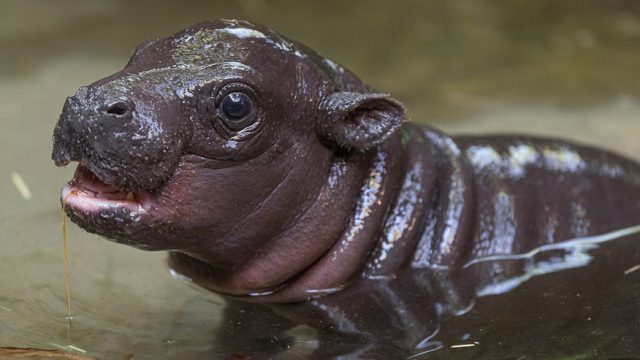 Read also : The Longest And The Greatest Duration Of A Single Lightning Flash 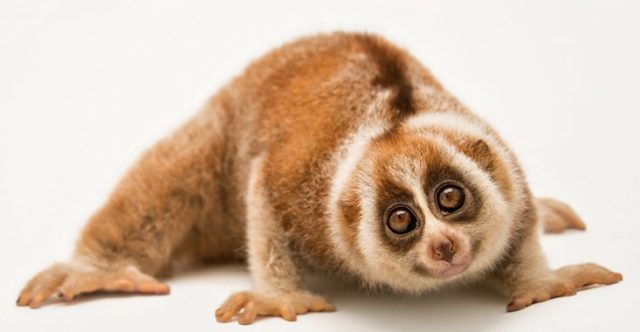 With its big, brown eyes, round head, and small, pointy ears, the slow loris is definitely one of the cutest animals out there. This exotic animal can be found in South and Southeast Asia, and despite its absolutely adorable looks, it is actually quite dangerous. The slow loris has a gland in its elbow that secretes a moderately potent venom, but this hasn’t stopped humans from taking it from its natural environment and selling it as an exotic pet. For this reason, the animal is currently endangered and listed as such on the IUCN Red List. Being cute isn’t always an advantage apparently. (image source) 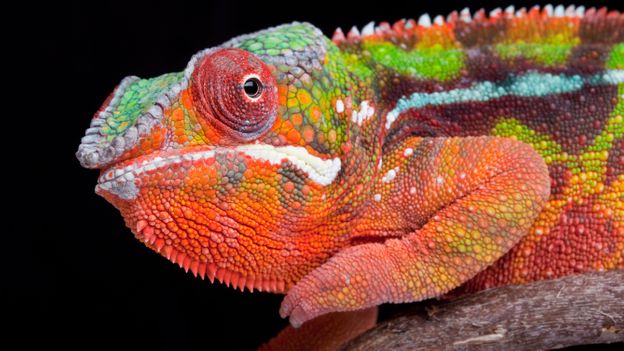 Chameleons are widely known for their incredible ability to change color and blend with their surroundings, which is why they represent some of the most popular exotic pets. Moreover, chameleons have a very unique and endearing way of moving around in a rocking manner, which makes them even cuter in our eyes. 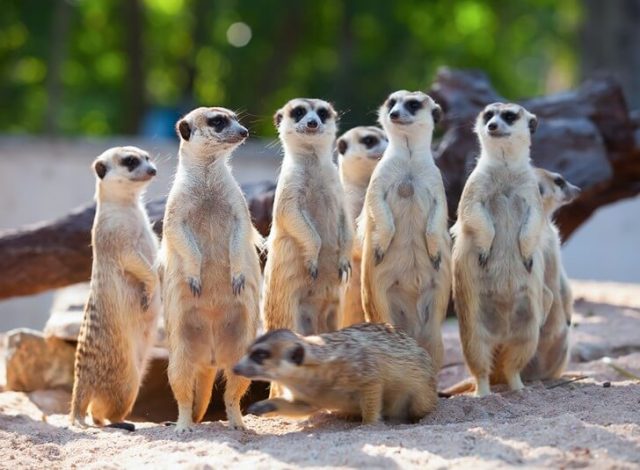 Even though it looks pretty much the same as its other mongoose cousins, the meerkat is famous for its human-like pose. These cute and agile little animals can be found in the deserts of South Africa and some parts of Angola. Highly social, meerkats live in “gangs” or “clans” of about 20 members, even though some larger families may include as many as 50 members. 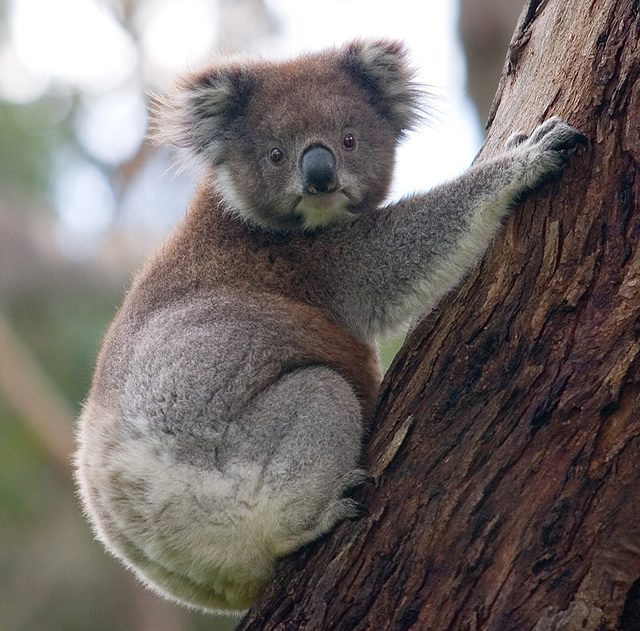 The Koala can be found in the wild in Queensland, New South Wales, Victoria, and some parts of South Australia. However, most of us are accustomed to seeing these cute, furry animals at zoos or in special reservations. Despite its endearing looks, the koala is actually an ill-tempered animal, but that hasn’t stopped us from including it in our top 25 of the cutest animals in the world. 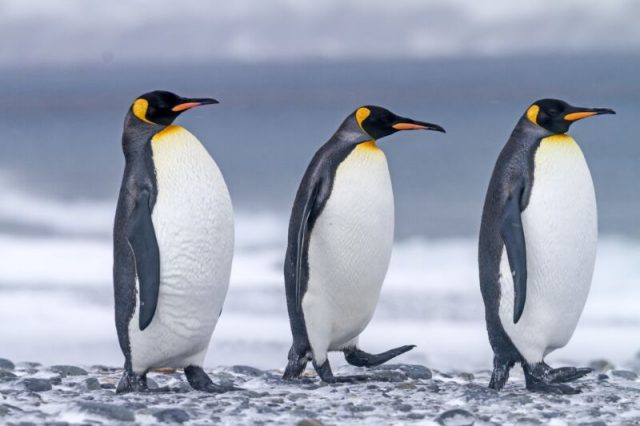 Over the last decade, penguins have secured a very special place in our hearts since they were featured in numerous animated movies that emphasized their cuteness. In the real world, penguins are divided into 17 different species, but most of them boast the same black and white appearance that we are accustomed to. Highly agile, these lovely little birds are in no way capable of flight, but they are quite versed at running and swimming. 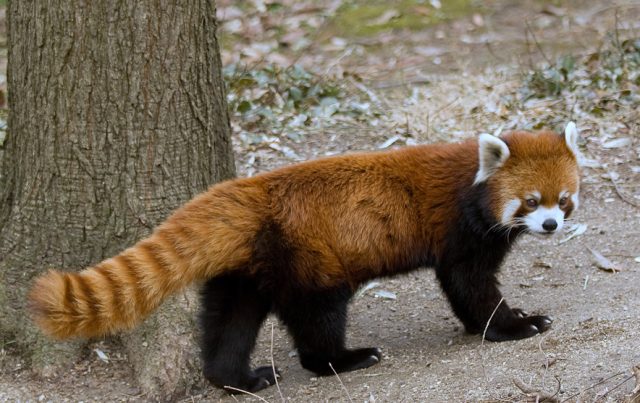 The red panda is also known as the red cat-bear, and for good reason, since this little furball is only slightly larger than a domestic cat. This solitary mammal is usually active only from dusk till dawn, and it spends most of the day sleeping or resting. With its bushy, ringed tail, short legs, and pointy ears, the red panda is surely one of the world’s cutest animals. 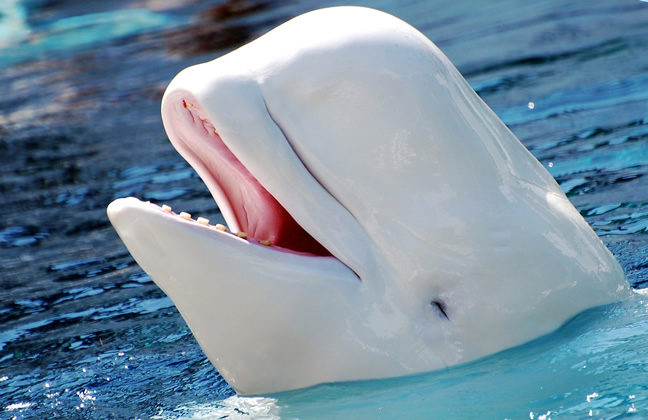 The beluga whale is also known as the white whale, and it can be found in the cold, clear waters of the Arctic and sub-Arctic. Even though it is undoubtedly a whale, the beluga is not all that imposing in terms of size, averaging a length of just 13 feet. Highly intelligent, the white whale can be trained to blow bubbles or to chirp on command. (image source) 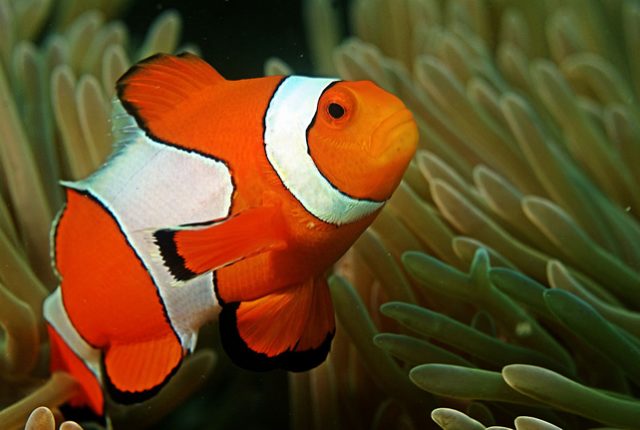 About 30 species of clownfish are recognized in the wild, all flaunting distinctly bright and colorful color patterns. Clownfish are known to share a symbiotic and mutually beneficent relationship with sea anemones. The largest clownfish species are known to measure up to 7,1 inches, while the smallest can barely reach 3,9. 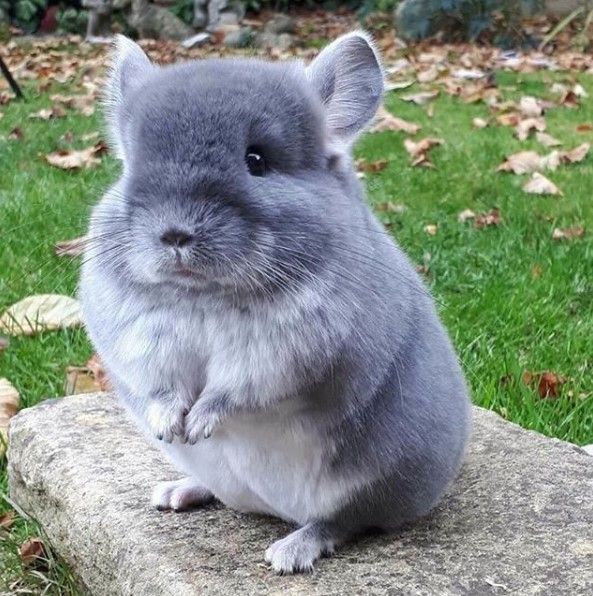 The small, cute and fluffy chinchilla hails from South America, and due to its extremely soft, plushy fur, it has been hunted to the brink of extinction during the 19th century. If you would like to spot one in the wild, you’re out of luck, since these particular rodents usually live at dizzyingly high altitudes. However, you can look for one at your local pet shop and keep it as a companion. 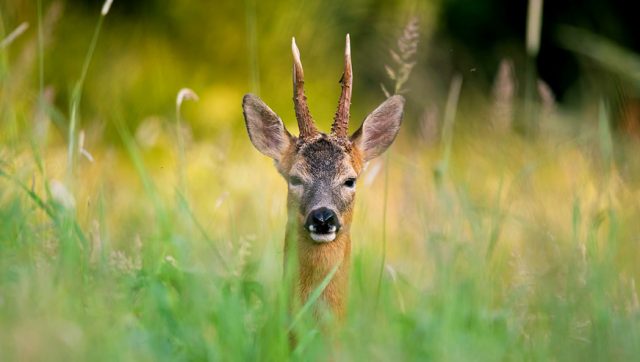 All it takes is a relaxing walk in the forest to spot a lovely roe deer. You will recognize this particular species by its beautiful chestnut-brown color, but also because it is no larger than an average goat. The roe deer’s overwhelming cuteness is what allowed it to earn a special place in our top 25. (image source) 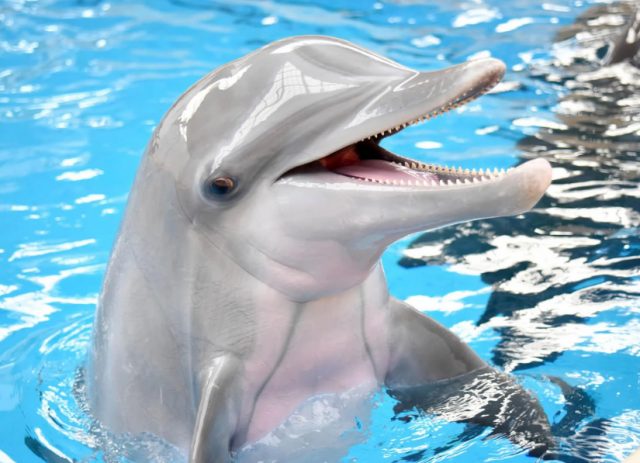 Dolphins are unmistakably some of the cutest and most popular marine animals, especially since they can be very friendly towards humans, at least in captivity. In their natural habitat, these agile mammals gang up and hunt in a very organized manner, but even then they still look quite harmless and cute. 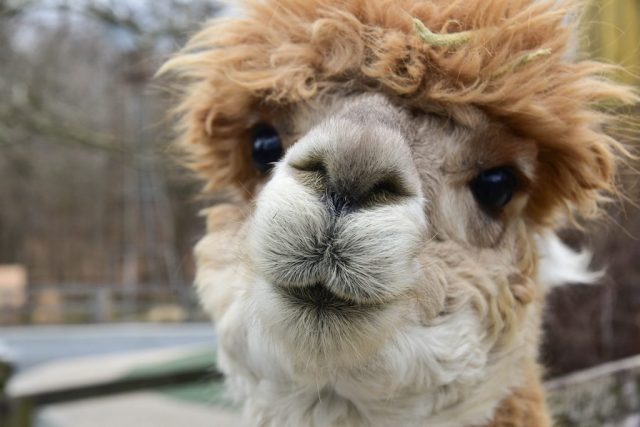 Alpaca hair is mostly used to make sweaters, but it also gives these calm, domesticated animals a unique, huggable appearance. Alpacas are related to lamas, and they are divided into 2 distinct categories named Suri and Huacaya. 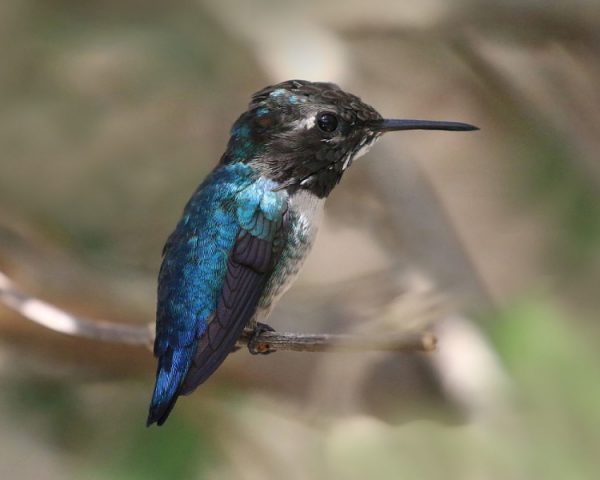 As the smallest bird in the world, the bee hummingbird is definitely the cutest. Hailing from Cuba, this tiny bird was named as such because it acts somewhat like a bee does, since its main activity consists of pollinating plants and helping them reproduce. The bee hummingbird can beat its wings at an estimated rate of 80 beats per second, which is so fast that the human eye perceives it as a blur. (image source) 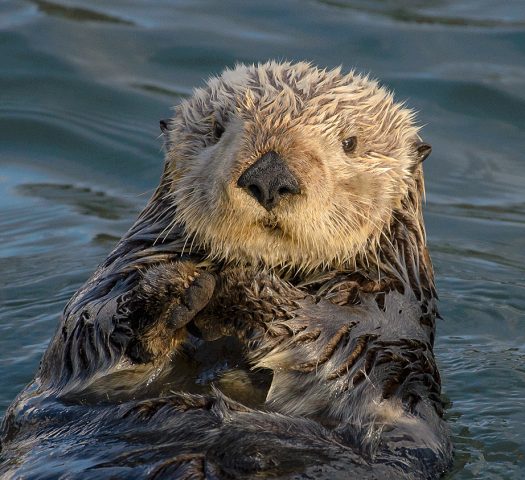 Sea otters are absolutely adorable, but also quite intelligent. This incredible marine mammal is native to the northern and eastern coasts of the Northern Pacific Ocean, and they actually represent the heaviest members of the weasel family, weighing in between 31 and 99 lb. Sea otters are social creatures, swimming in groups of up to 100 members while clasping paws so that they won’t drift away from each other. 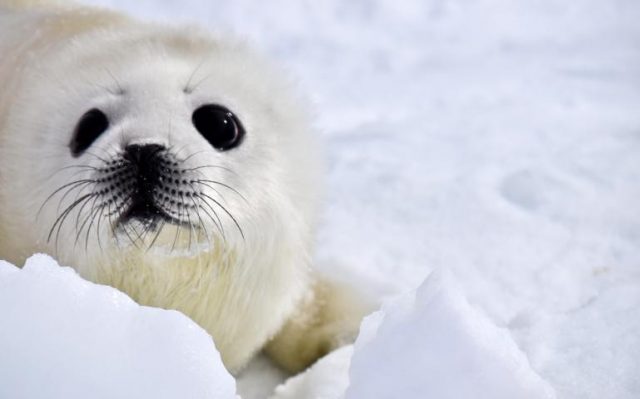 The harp seal is a type of earless seal that can be found in the northernmost parts of the Atlantic Ocean and some parts of the Arctic Ocean. Its innocent black eyes contrast nicely with its silvery-gray body, but it also features a series of harp-shaped markings on its back, hence the name. Despite being one of the most lovable and innocent creatures in the world, the harp seal is still being hunted extensively for its soft, plushy pelts. 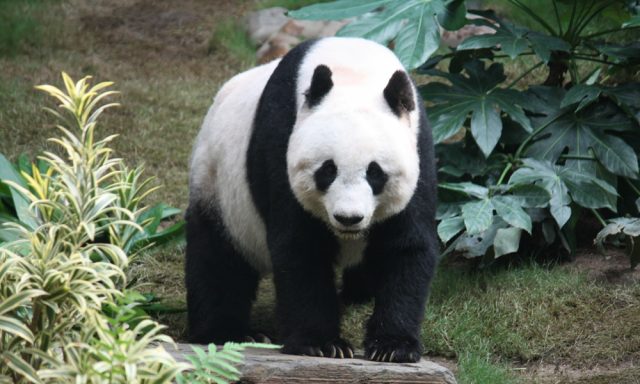 The giant panda is an endangered species, with only about 1,600 specimens left in the wild. The reason behind this is mainly caused by deforestation since pandas are highly dependent on bamboo trees in order to survive. 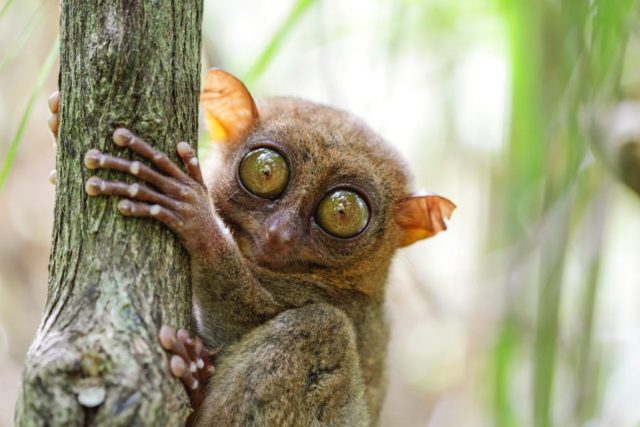 Tarsiers love their freedom, perhaps too much for their own good, since they have been known to commit suicide when they are in captivity. Sad business aside, this miniature primate is well known for its large eyes and small body, which make it one of the most endearing animals in the world. However, as we mentioned before, you should only hope to see a tarsier in the wild, especially if you want to see a happy one. (image source) 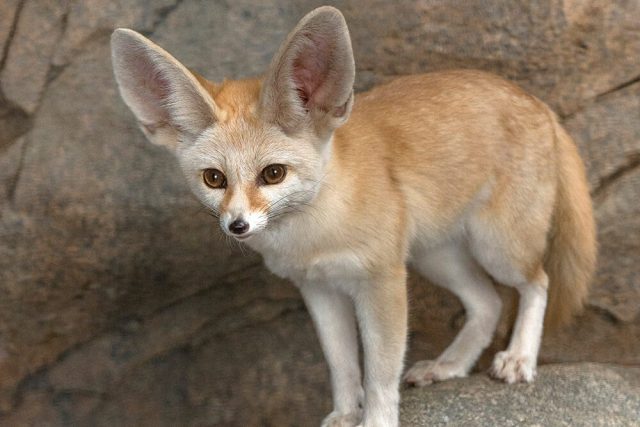 This nocturnal little fox can be found in the Sahara Desert of North Africa. Its most loveable features are its large ears and pointy face. Its harmless, cute appearance makes it a perfect candidate for domestication, especially since it is actually smaller than an average cat. And while this may sound good for humans, this is in fact a very bad thing for the fennec foxes, since many trappers are actively capturing them in order to sell them as pets or to put them on display. (image source)

However, if you do want to see a fennec fox in its natural habitat, you can do so by taking part in various tours across Egypt or Morocco.